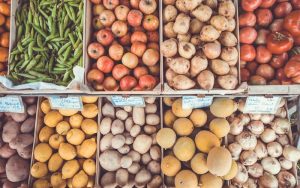 This simple, yet effective mantra is derived from Michael Pollan’s best-selling book In Defence of Food1 (the original quote being ‘Eat food, not too much, mostly plants’). If you haven’t read that book, then the ‘Eat food’ part of the statement is a little confusing. Isn’t everything that we eat food? The idea is that much of what is eaten today is very different to what even our great-grandparents would have recognised as food.

The reason for this is processing. When a food is minimally processed, it is considered to be a ‘whole’ food. I say minimally processed, rather than unprocessed, because there is very little available to us today that has not had some degree of processing, and processing in of itself is not necessarily a bad thing. A ‘whole’ food can also be described as ‘food as grown’. How close is it to something you could pluck from a tree, pick from a bush, or pull from the earth?

Let’s take an apple, for example. The most ‘whole’ would be if you were to pick a ripe apple from your own tree. This way it’s fresh, likely organic, and entirely unprocessed. Now most of us don’t have our own trees, so the best we can get is an apple from our local supermarket. This is still an excellent choice, but if we wanted to split hairs then we could talk about how ripe the apple was when it was picked, whether it was grown organically, how it had been washed, and whether it had been stored in cooled atmosphere storage before it reached you. Certainly none of these things would be particularly significant, but you can see that it’s not quite the same as homegrown or buying from a farmer’s market.

Real processing begins when the apple is peeled, cubed, and becomes apple pie filling. If we process it a bit further again, making sure it’s all mashed up and smooth, and perhaps add a little sugar then it becomes applesauce. Still not bad, especially if it’s sugar-free, but you can see that what started out as an apple is looking less and less like something we would have encountered often before we had machines and technology to do a lot of the work for us! Pressing the apples and removing everything except their natural juice is about as processed as it gets (although we could process apple juice further to make apple syrup), so while again this isn’t necessarily a ‘bad’ choice, you can see that most of what makes the apple an apple has been removed. Apple juice is clearly not a ‘whole’ food.

Firstly, as you might have guessed, these foods are the most nutritious for us. This is because they retain the nutrients that came naturally in the food. Secondly, these foods are closer to what our body’s natural mechanisms are used to. For example, the sugars in the ‘whole’ apple are packaged together with fibre, which helps our body keep the level of sugar in our bloodstream stable. If we remove the fibre by juicing the apple then our body responds quite differently, and struggles to keep our blood sugar levels steady2. A whole apple is also a lot more satiating than apple sauce, which is in turn more satiating than apple juice. This is a really important point when it comes to keeping a healthy weight. Usually the parts of foods removed by processing (fibre and water) are the same that enable us to feel ‘full’, which means the more whole your food is, the harder it is to overeat. Finally, eating whole foods allows you to minimise the amount of substances added to food that aren’t great for keeping you looking and feeling your best, like salt, sugar, and oils, and other extras like additives and preservatives. While most of us no longer keep salt shakers on the table, it may surprise you to learn that 70% of the salt we eat comes from processed foods. In Australia and New Zealand most of our salt intake actually comes from bread, which you might not even have thought of as a processed food (until now).

Clearly, asking yourself how ‘whole’ a food is, is very helpful for choosing the healthiest foods. So how about ‘mostly plant-based’?

A plant-based food is simply a food of plant rather than animal origin. Essentially this incorporates five food groups: vegetables, fruits, grains, beans and legumes, and nuts and seeds. As you were reading that list you were probably nodding your head, because almost certainly you have heard about the health benefits of foods in all of these categories, and you know already that you should be eating more of them. Perhaps you even feel you’re getting your fair share already! However, very few of us are actually eating ‘mostly’ plants. You may have heard advice to aim for 5 servings of fruits and vegetables a day, and be feeling you’re doing pretty well by getting thereabouts most days (in fact, the most recent Australian Dietary Guidelines recommend consuming at least 5 serves of vegetables and legumes, and at least 2 serves of fruit a day: less than 4% of the population reach the first goal and not quite a third meet the second3! New Zealand recommends at least 3 serves of vegetables, and at least 2 serves of fruit: 64% meet the first goal and just 57% the second4). Interestingly though, the more servings we eat the better we seem to do. Recently researchers demonstrated that while ‘5 a day’ is good, ’10 a day’ is much better5!

In fact, there doesn’t seem to be an upper limit when it comes to plant-based foods. Areas called The Blue Zones were first identified by National Geographic in 2005. These are the locations that are the home to the healthiest and longest living peoples on the planet: Okinawa, Japan; Nicoya Peninsula, Costa Rica; Ikaria, Greece; Sardinia, Italy; and Loma Linda, California6. One thing they all have in common is a diet that is primarily plant-based. On average, meat is eaten about 5 times a month, portion sizes are about the size of a pack of cards. The Okinawans, for example get almost 70% of their energy for the day from sweet potatoes7! While the Japanese are renowned for their consumption of fish and seafood, the Okinawans actually get only 1% of their energy from fish, compared to 6% from legumes, including soy and other beans. Something else you might be wondering is how a population in California, of all places, is right amongst this rather exotic sounding bunch and punching well above their weight when it comes to health and longevity. In fact, the inhabitants of Loma Linda will live on average 10 years longer than the average American, and are 10 times more likely to live to 100. Well, not at all coincidentally, this area is home to a large population of Seventh Day Adventists, and a plant-based diet is part of their belief system.

Why are plant-based foods so good for us?

Well, they simply pack more of a nutritional punch. They are full of a vast array of nutrients and compounds, many that are likely to still be discovered, that can do all sorts of amazing things for our body. Antioxidants are a prime example. Consider that even iceberg lettuce contains more antioxidants than any commonly consumed animal product, and that on average, plant foods have 64 times more antioxidant power than animal products8. That’s just one example, but if you want to learn more about what plant-based foods can do for you then check out Dr Michael Greger’s (Fellow of the American College of Lifestyle Medicine) excellent but rather morbidly titled How Not to Die9.

If plants are so good for us, is there ever a time when ‘only’ plants beats ‘mostly’ plants?

Interestingly it appears so. The Blue Zones provide a great example of people who are extraordinarily healthy and long-lived through eating mostly plant foods most of the time. However, medical pioneers and researchers Dr Dean Ornish and Dr Caldwell Esselstyn have demonstrated that at least for patients with heart disease, ‘only’ plants is the safest option. Both have demonstrated reversal of atherosclerosis with a diet that eschews animal products entirely and focuses on whole plant-based foods that are low in fat. If you have a personal or family history of cardiovascular disease especially, then Dr Esselstyn’s Prevent and Reverse Heart Disease10 is a must read.

For your best health ever, simply ask yourself two questions when it comes to choosing a food, choosing more that check both boxes:

Eating more whole, plant-based foods doesn’t at all mean you’re going to be confined to a bland and monotonous regimen of fruit and vegetables. Nor does it mean you’re going to need to fork out to enjoy tempeh, hemp seeds, or kale smoothies. Nowadays there’s recipes for everything from pizza to burgers to cakes and cookies that can help you to maximise your intake of foods that are mostly whole and mostly plant-based. Swapping in just one entirely plant-based meal each day, and increasing the quantity and variety of other whole plant-based foods at other mealtimes is a great way to start, and you’ll soon notice the benefits in how you look and feel!

The Society of Lifestyle Medicine of Nigeria (SOLONg) intends to host a VIRTUAL conference this year. Date: DECEMBER 2 – 4, 2021

Please note this year’s exam will not take place during the conference but will be held in a Prometric Test Centre from December 4th to December 10th 2021.